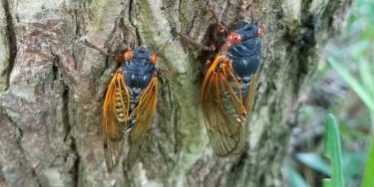 Headnote from CobraCaroline: My friend Fran Taylor currently resides in Falls Church, Virginia, however, her family also owns a beautiful home in Oughterard, Ireland that I have been lucky enough to visit. Fran wrote this article about the cicada emergence in Virginia for the Corrib News – a community magazine from her village in Ireland.

Can you remember what you were doing in the summer of 2004? For the billions in the brood of 17-year cicadas now emerging in the eastern USA, this was the year that they last saw daylight after they hatched from eggs laid in the tips of tree branches. After dropping to the ground and burrowing down into the soil, they spent the next 17 years feeding on tree roots, moulting several times along the way as they grew. Now all these years later, they are to complete the cycle – all at the same time.

The astonishing phenomenon of periodical cicadas is unique to the eastern USA. There are about 15 distinct broods, all on different schedules, but each brood is synchronized so that the nymphs all emerge together, when the ground temperature reaches 18 degrees Celsius – around mid-May here in Northern Virginia. They are thought to have developed this bizarre lifecycle as a species survival strategy – their sheer numbers overwhelm all possible predators, and timing their emergence to be a prime number of years means that the potential predators tend not to develop corresponding life cycles to take advantage of them.

The cohort now appearing here is known as Brood X (Roman numeral ten), and is one of the largest. Its range includes Pennsylvania, Maryland, and parts of Virginia, down into Tennessee. Their numbers are immense – in some places up to a million per acre. The emerging nymphs each leave a small round hole in the ground and climb the nearest vertical surface to find a good spot for one final moult – from which the winged adults materialize – while the nymphs’ shed exoskeletons pile up against tree trunks and fences like leaves in autumn.

The adults’ bodies are black, about an inch long with bright red eyes, orange legs, and glossy translucent wings, but they seem closer to two inches when resting with their wings laid back. They are completely harmless, don’t bite or sting, and are very clumsy and completely unprepared to defend themselves. They are totally unafraid of humans – you can pick or brush them off when they blunder around and land on you – they do tickle a bit! They provide a treat for almost all insectivorous wildlife – and also domestic pets. Dogs in particular will gorge on them until they are sick. Cats, of course, are pickier, but have plenty of fun chasing them around.

They are not at all scary, although some people instinctively recoil from them and turn to pesticides to get rid of them. But that is a shame as they have several side-benefits in that they prune trees, aerate soil, and provide a protein-rich diet for many animal species. They do not cause widespread damage by eating vegetation, unlike locusts (which the early colonists mistook them for.) They simply suck sap from twigs and branches, which the trees tolerate.

Eventually the winged adults fly up into the trees where the males commence an almighty racket that grows in volume daily, from dawn until dusk. Collectively their noise supposedly peaks at the same volume as a lawn mower – you certainly can’t ignore them!

The purpose of their ‘singing’ (the noise is made by membranes in their abdomen) is to attract females – they do little else other than mate and eat for the duration of their short adult lives. After mating, the female deposits her eggs in a slit that she makes at the tip of a tree branch. This does not seriously damage the tree, although by the end of summer you can often see a few brown leaves at the ends of branches. In a few weeks, the eggs will hatch and the tiny larvae will fall to the ground to begin another 17-year cycle. The adults die soon after mating and by the end of June, the noise will have subsided, and they will all be gone. The regular annual cicadas – a totally different species – which typically can be heard during July and August will then have the airwaves to themselves.

Local media and newspapers have been filled with all things cicada recently. In addition to educating us about these amazing creatures, we also learn that you can eat them – indeed I have seen some recipes, such as for crispy fried cicada, or even candied cicada! However, unlike my sister’s articles for this magazine, I have no intention of including any of these!

But what a very strange life – underground for 17 years and then just 2-4 weeks of life above ground. No one knows for sure how they keep count of the years, but there is speculation that they can detect the change of seasons from variations in the tree root sap that they live on. I wonder what it will be like when they next emerge in 2038 – coronavirus by then will probably be but a bad distant memory, and today’s kids will be all grown up. Besides, I think I prefer to live my life above ground!

Looking for a fun and educational LIVE show made for kids all about bugs? Check out the BUGS! puppet show along with all my other entertaining wildlife puppets shows. Shows can be performed virtually anywhere in the world or in-person in the Northern Virginia area. So whether you have a day care center located in Annandale VA, USA or a preschool in Oughterard, Ireland – Book Your Kids Nature Show Today!

Kids Nature Shows Teachers Guide to the “Animals in Fall & Winter” Show
October 30, 2020
FAQs
What our Clients Say:
We had a lovely virtual meeting with Cobra Caroline and all of her wonderful animals,. The children were engaged, interested and participating. We hope to use Kids Nature Shows again in the future.