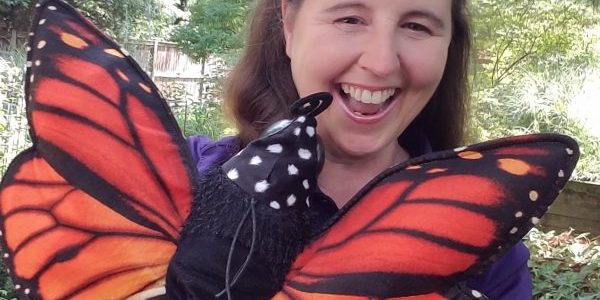 And what a year it’s been! Oh my goodness, who could have ever thought back in the olden days of September 2019 that 2020 would be so weird! Last year, when I made the decision to close Reptiles Alive and start Kids Nature Shows, I knew I was in for some big changes – but I never predicted just HOW BIG those changes were really going to be!

After opening Kids Nature Shows LLC in September 2019, I began producing and performing the new animal puppet shows. It was so exciting to be developing new wildlife programs where I could use just about any animal species in the show! Sharks? Sure. Dinosaurs? Of course! As the months went on, I got “know” each new animal puppet’s personality and how it would act in the programs. I was having a blast!

In January, as usual, summer bookings started coming in. I wasn’t sure how many bookings I would get with the new company, but I didn’t need to worry. By the end of February, my summer schedule was full of shows for camps, libraries, day care centers, and special events. It was looking like my first summer with Kids Nature Shows was going to be spectacular!

During Fall and Winter, in addition to Kids Nature Shows, I was also still operating Reptiles Alive. On March 12, I performed my last Reptiles Alive show not knowing it would be my last. There had been news about the new corona virus and people were getting nervous, but schools were still open. On Friday March 13, I got up at 7 am, loaded up reptiles I would need for my 10 am show, and drove to the private school in Vienna where I was scheduled to perform. When I arrived, the parking lot was empty. Ruh-roh.

I called the school’s office number and luckily, someone answered. They apologized for not letting me know they had closed the school that day and did not know when they would re-open.

As the news about the virus became worse, schools made the decisions to shut down for the rest of the year and go “virtual.” I contacted all of my scheduled Reptiles Alive and Kids Nature Shows clients that had bookings through the end of May. All the clients booked in March & April went ahead and cancelled right away. Many of my May clients (now only Kids Nature Shows clients), wanted to wait and see and I kept them in my calendar, but I was not optimistic.

The plan made back in the summer of 2019 was that my longtime Reptiles Alive employee Rachel Walker would take over Reptiles Alive at the end of April 2020. After all my final Reptiles Alive shows were cancelled, she graciously agreed to take in the animals a month early. Over the course of two grueling days, Rachel, myself, and a number of very good friends were able to safely move all the live animals and equipment.

After nearly 25 years, I was no longer a part of the business I had spent my life creating, building and operating. This was a huge change – however, I was ready and excited to fully focus on my new adventure with Kids Nature Shows.

But the corona virus made things harder and scarier.

During the month of April, I was not able to perform any shows at all. It was a very strange time and it was hard to remain positive about the future of outreach environmental education programs.

By May, a few children’s performers had begun offering virtual shows online. This was a brand new concept to me. Kids entertainers performing live online for an audience of preschoolers? For real? Would that even work? As it turns out, virtual shows for kids do work. If you had told me in 2019 that I was going to be performing virtual online shows for schools and children in places as far away as New York, California, and even Hawaii, I might not have believed you. Now, I have learned how to do Zoom, Facebook Live, and Youtube videos for kids from all over. And it IS fun! Different from performing in-person for sure, but it works.

By June, day care centers and summer camps began asking if I could do in-person shows, and the answer was and is YES. I make in-person shows safer by wearing a mask, staying at least 10 feet away from the audience, and bringing my own table and PA system.

My first in-person show happened outside on a very hot June morning. I performed 3 back-to-back Backyard Wildlife shows. I’m not going to kid you, wearing a mask in high heat and humidity while performing wildlife puppet shows for preschoolers is no joke. But I learned a few things: 1. Bring extra masks (because the one you are wearing will get wet with sweat) 2. Bring lots of cold water. 3. Bring a cold wet towel. 4. Try to be under shade. After that, I got into the swing of things.

As July wore on, I became much more positive. There is something about sharing the joy and fun of nature with kids that always improves my overall outlook on life. No matter what else was going on in the world, kids were laughing hysterically at the puppets and stories and begging for me to “do it again” when the show was over. Life began to feel a bit more “normal.”

I know teachers, parents and students are all doing the best they can as schools and day care centers start figuring how to make virtual or in-person learning work. If you, or anyone you know, is looking for fun and educational entertainment for kids, give me a call (703 560-0257) or email. I can customize visits to fit your curriculum or unit and have a ton of super fun shows ready to go. Kids are LOVING the animal puppet shows – and so am I!

The future is unpredictable, that is for sure! But I am optimistic that Kids Nature Shows will continue to delight young audiences with fun and educational wildlife puppet shows for many years to come.

What a long, strange trip of a first year it’s been for Kids Nature Shows.

Kids Nature Shows Teachers Guide to the Animal Kindness Show
November 23, 2020
FAQs
What our Clients Say:
We had a lovely virtual meeting with Cobra Caroline and all of her wonderful animals,. The children were engaged, interested and participating. We hope to use Kids Nature Shows again in the future.