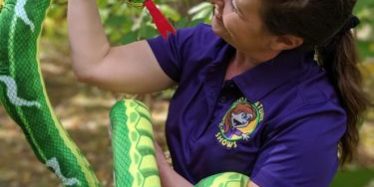 2. Snakes are SCARED of PEOPLE! Just like some of you are frightened when you spot a snake, snakes are terrified when they see a person! Snakes view humans as HUGE predators that could seriously hurt or even eat them. When a snake notices a human nearby, the snake feels fear and it will either freeze, flee, or fight. If you stay back from the snake, it will not chase you. Snakes are not aggressive towards humans – that would be like a mouse being aggressive towards a lion – a deadly mistake! If you simply leave the snake alone, the snake will leave you alone as well. People are sometimes bitten by snakes when they accidentally step on or get too close to an unseen snake, but many snake bites occur when people engage with a snake on purpose. If you see a snake, remember, that snake is literally terrified for its very life. If you get too close, it will become defensive to try and get you to back off. If you leave snakes alone, snakes will leave you alone.

3. Snakes help people. It is true, in many different ways snakes really do help us. By eating rodents, snakes reduce the number of ticks and tick-borne diseases that are so dangerous to people. Snakes also help farmers and our food supply by keeping rodent populations in check. It is super healthy for you to have snakes living in your neighborhood. Even venomous snakes help us. Their venom provides scientists with chemicals currently being made into medicines that treat a variety of human diseases including heart disease, kidney function, and certain cancers. And the future of snake venom research is full of more possibilities for helping people who are sick. A snake could possibly save your life one day.

4. Snakes can feel pain just like people. Even though snakes cannot scream or even say “ouch,” they will avoid situations that cause pain. If injured, pain killing drugs used on humans are successfully used on snakes. According to the book Pain Management in Veterinary Practice, “Reptiles, amphibians, and fish have the neuroanatomy necessary to perceive pain.”

5. Social media, TV, movies, and popular culture perpetuate negative and sensationalized falsehoods about snakes. Just like everything else, do not believe everything you see or read about snakes in the media. So many scary made up stories and “fake news” about snakes are promoted online and on TV, movies and even in newspapers that it is no wonder so many people are afraid of snakes. If you take the time to educate yourself about snakes from real snake experts and wildlife professionals, you will learn that snakes are nothing to be afraid of. Snakes are simply wild animals that just want to be left alone.

6. There are no easy/quick ways to tell the difference between venomous and non-venomous snakes – so just leave them ALL alone. There are many myths and misunderstandings about identifying snakes. Learning to identify snakes takes the same time and patience as learning any new skill, such as bird or mushroom ID. There is not a single, easy characteristic such as head or eye pupil shape or a single color or pattern you can remember to ID all snakes. It takes time and practice to learn how to identify snakes. So if you see a snake of any kind, just leave it alone.

7. Snakes are beautiful. Snakes come in so many different colors – red, yellow, green, even blue! Snakes have appealing patterns on their skin. Snakes move with grace and elegance. The next time you are lucky enough to see a snake, give it space, and observe it. You just might decide you love snakes as much as I do!

You can also contact snake expert CobraCaroline directly with any snake questions.

Kids Nature Shows Teachers Guide to the Animal Kindness Show
November 23, 2020
FAQs
What our Clients Say:
We had a lovely virtual meeting with Cobra Caroline and all of her wonderful animals,. The children were engaged, interested and participating. We hope to use Kids Nature Shows again in the future.